U.S. Market Advisors Law Group PLLC (USMA) is preparing for the filing of a securities fraud class action against Danske Bank A/S (Danske), on behalf of investors who suffered losses from purchases of Danske Bank ADRs (OTC:DNKEY) between February 6, 2014 and October 4, 2018 (Class Period). The action is brought against Danske and certain of its current and/or former officers and directors for violations of the Securities Exchange Act of 1934 and Securities and Exchange Rule 10b-5 promulgated thereunder.

Complete the Contact Formbelow to participate in the action and to receive the complaint before it is filed. You may also contact Managing Attorney David P. Abel to discuss this matter at no obligation or cost: (202) 274-0237, [email protected].

Summary information on the matter is provided below.  Click on the following links to jump to the relevant section:

Motivated by easy profits and desires to expand, Danske secretly participated in the one of the largest international money laundering operations in history.  While the review remains incomplete, the bank last reported more than $230 billion in suspicious transactions were being investigated.

The money laundering scandal was born out of Danske’s acquisition of an Estonian bank in 2007 (Estonian Branch).   Estonia has long been a transfer station for moving funds from Russia, and its former Eastern Bloc countries, to the West.  A substantial portion of those funds are derived from dirty activities by criminals looking for a place to clean their money.   Over time, Danske’s Estonian Branch became a favorite laundry mat.

Nonetheless, Danske saw that the Estonian operation could be profitable and a way to gain market share in the Baltics.  Turning a blind eye when necessary would allow management at headquarters to get great blood sausages without having to watch how it was made.  This was particularly appealing for Defendant Thomas F. Borgen (Borgen) who was aspiring through the corporate ranks. As a long-time Danske employee, Borgen watched, before and after the acquisition, how the Estonian Branch might be leveraged.  Then in 2009, Borgen became Head of International Banking Activities, which included Estonia.  To boost his performance, Defendant Borgen allowed the Estonian Branch to continue reaping illicit profits.  By 2010, Defendant Borgen even began socializing the of idea of increasing the core of the Estonian Branch’s money laundering business—Non-Resident Portfolio customers.

At its peak in 2011, the Estonian branch generated 11% of Danske’s total profits before tax, despite only accounting for 0.5% of the Bank’s assets. Neither were money laundering profits limited to what was generated inside walls of the Estonian Branch. Danske headquarters in Copenhagen actually executed some of money laundering payments at issue.  Moreover, it was Danske headquarters that controlled the spread, fees and exchange rates for critical transactions made by the Estonian Branch. All the while, senior executives and the Board of Directors enabled the charade to continue.

From 2007 through 2015, the Non-Resident Portfolio grew to approximately 10,000 customers.  These accounts executed more than 7.5 million payments that would ultimately become part of a corruption investigation involving untold billions of dollars in transactions.

Unsurprisingly, Defendant Borgen became Chief Executive Officer of Danske in 2013. In the same year, a tenacious whistleblower began sounding alarms of suspicious documentation he had uncovered at the Estonian Branch.  Over the next year and a half, Danske attempted to delay taking action.  But the whistleblower and mounting warnings from financial regulators began to take its toll.  As an early line of defense, Danske attempted to roll out better risk and compliance measures to shore up money laundering activities.  Those efforts were futile given that the Estonian Branch had historically been permitted to operate independently from corporate activities.  The Estonian Branch had its own IT and accounting platforms, and purportedly managed its own internal controls.

Aware of the growing exposure, and failed rehabilitation efforts, Danske insiders next attempted to quietly divest themselves from the money laundering scandal by selling the Estonian Branch.  However, by 2015, it was too little too late.  Mounting pressure caused Danske to announce that its Non-Resident Portfolio in Estonia would be closed.  The Bank cited worsening macro-economic conditions and lack of profitability for the closure.   But Defendants secretly knew the real reason was that the Bank was sitting on a ticking time bomb.

Still publicly, Danske reported stellar performance.  The Bank’s return on shareholders' equity smashed records ahead of target dates.  For fiscal years 2015 and 2016, Danske's reported returns of 13.1% and 13.6%, respectively. The results were ahead of schedule, and way above, Danske's long-term ambition of at least 12.5% by 2020. Accordingly, as a direct result of Defendants’ wrongful actions, Danske’s securities traded at artificially inflated prices throughout the Class Period.  Danske's ADR price appreciated more than 45% from the beginning of the Class Period, up to the final trading days prior to the initial fraud disclosures.

The truth began to emerge on February 27, 2018, when the Estonian FSA announced that it would (once again) investigate whether Danske had failed to provide information about allegations of money laundering linked to the Russian elite and intelligence services.  The announcement publicly disclosed what had often been privately speculated about Danske’s Baltic operations.

On May 3, 2018, Denmark's Financial Supervisory Authority (FSA) issued a blistering report on an investigation of management and senior employees, as part of an anti-money laundering probe into the Bank’s Estonian Branch.  Danske was given eight reprimands and eight orders for “historically not liv[ing] up to its obligations in the AML area.”

On September 3, 2018, the Financial Timespublished an article entitled, “Scandal-hit Danske branch handled $30bn of Russian money,” raising the stakes with new details of an independent investigation into the financial scope of the Danske money laundering debacle. The article attached a dollar amount to the scope of the transactions that was exponentially greater than had been speculated—$30 billion.  Unfortunately for Danske investors, the Financial Times eye-popping number would only be a fraction of the actual money laundering scope.

Just days later, on September 7, 2018, the Wall Street Journalreported that an investigation into the money laundering scandal at Danske’s Estonian Branch involved more than $150 billion in transactions.

On September 14, 2018, the Wall Street Journalreported that unnamed sources provided information showing that U.S. law enforcement agencies were probing Danske over allegations of money laundering by Russian and Eastern Bloc actors.  The article articulated how the money laundering scheme transferred dirty money into U.S. dollars through the Federal Reserve’s wiring system. Moreover, it speculated the investigation could escalate into a “death blow” for Danske, if the U.S. Treasury decided to restrict the supply of U.S. dollars to the Bank.

On September 19, 2018, Danske provided the findings of its internal investigation on the money-laundering scandal.  Among the findings, was that the probe had now grown to investigating more $230 billion in transactions.

Finally, on October 4, 2018, Danske announced that it was is in dialogue with the U.S. authorities regarding the Estonian Branch scandal, and that Danske Bank had received requests for information from the U.S. Department of Justice.  The fear of a death blow had now become a plausibility.

The above cascading negative disclosures caused Danske’s ADR price to decline dramatically towards the end of the Class Period.  Danske closed at $11.03 per ADR on October 8, 2018, a 46.71% decline from its close price of $20.70 per ADR on February 26, 2018—the prior trading day before the initial fraud disclosure.

As a result of Defendants’ wrongful acts and omissions, and the precipitous decline in the market value of the Bank’s securities, Plaintiff and the other Class members have suffered significant losses and damages.

Danske is a Danish corporation with its principal executive offices located at Holmens Kanal 2-12, Copenhagen, 1092, Denmark.  Danske is the largest financial institution in Denmark. The bank’s activities are concentrated in the Nordic region and has a presence in at least sixteen countries.  Danske offers traditional banking services in addition to life insurance, pension, mortgage, wealth management, real estate and leasing services.  Danske has approximately 2.7 million personal customers, over 200,000 small and medium-sized business customers, and around 2,000 corporate and institutional customers.  Danske is licensed by the FSA in Denmark, which considers the Bank to be one of six systemically important financial institutions in Denmark. 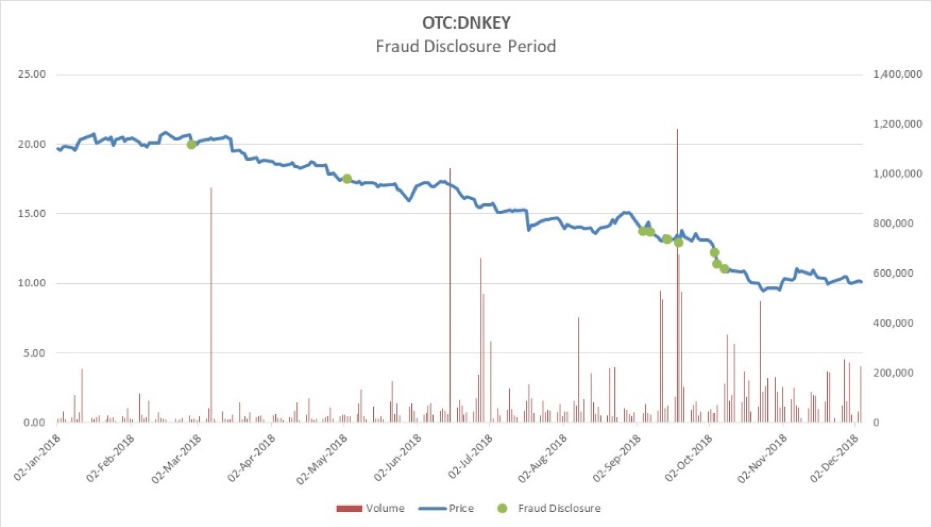 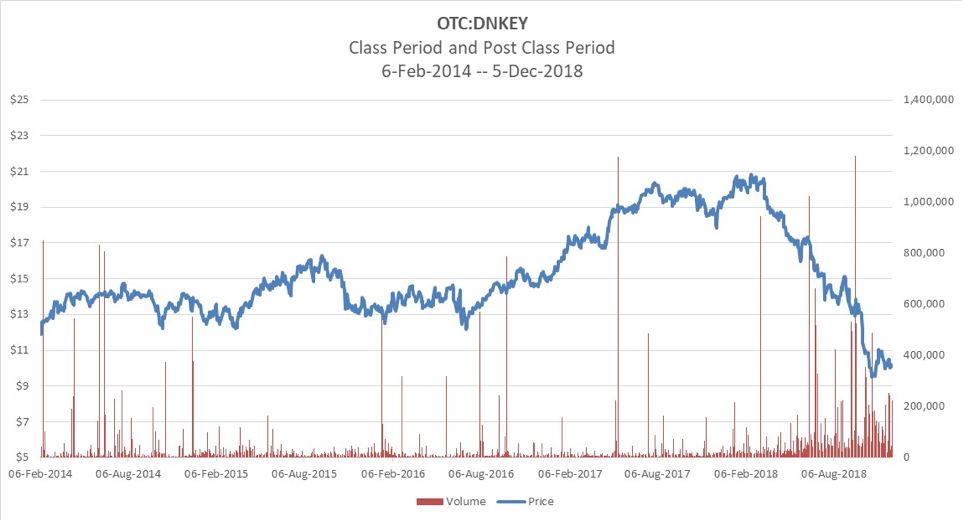 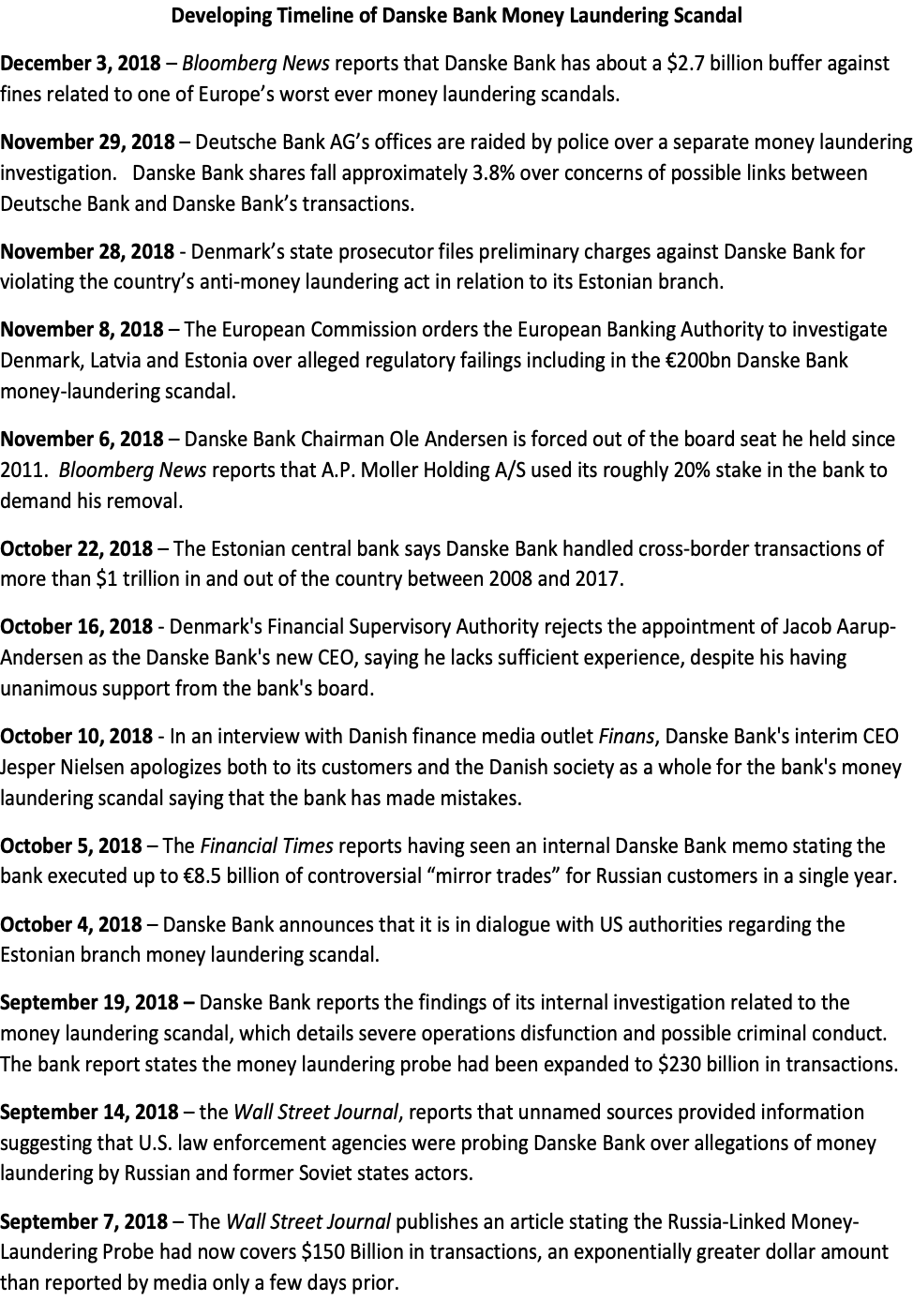 USMA’s Danske investigation is on behalf of investors that traded ADRs on an exchange/market in the United States.  Litigation on behalf of investors that traded Danske common stock on the Copenhagen exchange in Denmark is also underway.  While USMA has consulted and continues to work with Danish attorneys and experts, it is not litigating a matter in Denmark. Common stock traders desiring to participate in a Danish action may contact ISAF Managementfor more information: https://isafmanagement.com/.